Strange love of linen, or how I learned to stop an arrow (and enjoy the process) 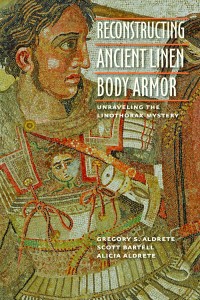 I blame Alexander the Great. Because of him, I’ve had to pore over close to a hundred ancient Greek and Roman texts, repeatedly scan and document armor variations on over a thousand Greek vase paintings and sculptures, learn more about the flax plant than I ever thought was possible, and get shot multiple times with arrows by my former history professor (who was, thankfully, a skilled enough archer for me to be here today and writing this post). And yes, I was wearing armor. Fortunately, these experiences have all been extremely rewarding.

It has been just about a decade since the team of Gregory Aldrete, Alicia Aldrete, and I first began the research and reconstruction phases of what would eventually turn into the University of Wisconsin–Green Bay Linothorax Project. Our overall goal was to research and reconstruct a type of body armor made of linen, known as the linothorax, that was used by numerous ancient peoples around the Mediterranean, then subject the replica armor to a number of weapons tests. The end result was the publication of Reconstructing Ancient Linen Body Armor: Unraveling the Linothorax Mystery.

What started from humble beginnings has now blossomed into something I would have never imagined. It all began with a desire to learn as much as possible about Alexander the Great and, more specifically, the type of armor he wore. In the famous Alexander Mosaic that was recovered from the ruins of Pompeii, the Macedonian king can be seen wearing a type of body armor far different than the typical bronze cuirass ancient warriors are so often portrayed as wearing. 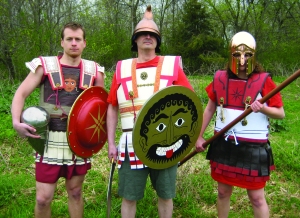 Three versions of reconstructed linothorakes. The one on the left is modeled after the linothorax worn by Alexander the Great in the Alexander Mosaic from Pompeii.

I knew little about this armor and I instantly wanted to know more. Exactly what kind was it? I plunged into the history books, searching for an answer. Unfortunately, aside from brief references, there was little information about Alexander’s armor in either the ancient texts or the modern ones. Unsatisfied by the results, I wanted to get to the bottom of this mystery. After turning to research in other periods of history, I decided to try my hand at experimental archaeology and attempted to construct a version of the armor for myself. I settled on a technique using glue and fabric, laminated together in numerous layers much like modern Kevlar. The result was a near-perfect match for linothrax in both form and function.

As stereotypically poor college student, however, I made my first replica set of armor out of inexpensive materials: cotton cloth and Elmer’s School Glue. It wasn’t long before I had constructed three replica suits of my own and had a fourth on the way, now using more accurate ancient equivalents. At any given time throughout this project it wasn’t uncommon to see fabric spread out and glued together on every surface I could find, from kitchen tables to the family room floor to a ping-pong table that served as my main workspace. Armor-making supplies covered them all. I showed each new suit around like a proud father, extolling its unique new features and designs. Linen armor was now a part of who I was. Never did I think that a simple question about armor would end up being such a large and constant part of my life.

The continued development, enduring nature, and surprising success of the Linothorax Project is in large part due to Gregory and Alicia Aldrete, my coauthors and co-principle investigators. Their drive, enthusiasm, knowledge, and friendship made nearly every phase of the project possible. Together, we have presented our research and displayed the armor at many different venues around the nation, and even a few places around the world. Due to the surprising nature of the Project, particularly our decision to recreate ancient armor and test it with ancient weapons, our work has attracted an equally surprising amount of attention. It’s been the subject of documentaries and TV shows shown in the United States, Europe, and Canada. Most recently, our book and the Project was the subject of an article in the New Yorker. 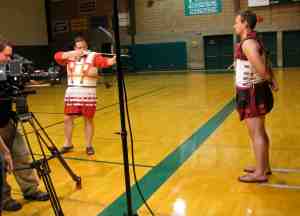 Interestingly, film crews loved seeing an actual person shot with an arrow while wearing the linothorax, so I often volunteered (perhaps against my better judgment). Over the course of the research, I was shot approximately a dozen times while wearing the armor. There is nothing like the thrill of looking directly at an archer taking aim a mere ten feet away from you, about to shoot an arrow straight at your chest (especially when the archer is your former history professor, coauthor, and friend). Thankfully, the armor worked each time!

From gluing together random scraps of cloth in a basement, to being shot with an arrow on national TV, to being published with Johns Hopkins University Press, the journey of the Linothorax Project team continues to astound us all.

Scott Bartell is an independent scholar who has published and presented on linen body armor and Alexander the Great. He is the author, with Gregory Aldrete and Alicia Aldrete, of Reconstructing Ancient Linen Body Armor: Unraveling the Linothorax Mystery.

2 responses to “Strange love of linen, or how I learned to stop an arrow (and enjoy the process)”