Emily Dickinson Journal publishes its 25th volume in 2016 under the guidance of a new editor. James R. Guthrie, Professor of English Language and Literatures at Wright State University, now helms the journal. He joined us for a Q&A about his new role and the journal’s anniversary.

How did you come to take the editor position at the journal?

I was invited to take the position by Cristanne Miller, the EDJ‘s previous editor. 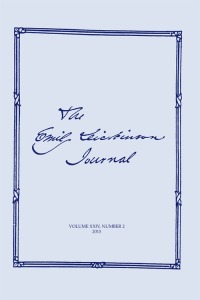 What is one surprising thing you have found in the transition?

Learning to use ScholarOne. (Ed: An online system for manuscript submission and review) I was quite intimidated by ScolarOne when I took over the editorship. But now, with two issues under my belt, I’m much more comfortable with that program. ScholarOne is still not as user-friendly as I would prefer, but I’ve come to appreciate what it can do for me, as an editor.

Emily Dickinson Journal will publish its 25th volume in 2016. What does that milestone mean for you?

Twenty-five years is indeed a milestone for the EDJ. Personally, those 25 years coincide roughly with my own scholarly interest in Dickinson. It has been a real pleasure to watch Dickinson move from the fringe of recognized American writers to canonical status. My wife jokes now that she can rarely open an issue of the Sunday New York Times or the New Yorker without coming across a reference to Emily Dickinson. She has definitely entered the mainstream of American culture and literary history.

What kind of plans to you have in the short term for the journal?

Now that I’m more comfortable with the position of editor, I look forward to using the EDJ to encourage growth in particular areas of Dickinson scholarship. For example, I’m interested in encouraging interdisciplinary approaches to her poetry. I also like cultural materialist / new historical approaches. Also, there’s a good deal of interest among Dickinson scholars these days in looking more closely at literary kinships between Dickinson and other 19th-century American writers such as Melville and Thoreau. Then too, Dickinson scholarship has become increasingly international in scope. Foreign scholars have much to offer about the reception of Dickinson’s work in their countries, translations of the poems, and similarities between her work and that of local celebrated authors.

What kind of advice would you give to scholars looking to publish in the journal?

I would certainly advise scholars considering submitting work to the EDJ to go ahead and do so — we welcome any sort of scholarship concerning Dickinson. And Dickinson is something of a hot property these days in scholarship and the media — so young scholars may boost their own careers by focusing more intently upon Dickinson’s work. The network of Dickinson scholars is (drawing upon my own experience) welcoming, receptive to new ideas, and friendly. So, take a chance on Dickinson — I think all of us practicing Dickinson scholars are happy that we did.